Go Directly To Rewards
Welcome to the PledgeManager for Deadlands: the Weird West!
If you missed our campaign, don't dismay! Just choose an option below.

Welcome to the Weird West of Deadlands, the original horror western roleplaying game for the Savage Worlds core rules!

In this award-winning, best-selling setting, gunfighters, braves, hucksters, martial artists, shamans, mad scientists, the blessed, and more square off against far more than desperate bandits. An event called "The Reckoning" awakened an ancient evil, and you'd best hope the howls you hear on the High Plains are just a pack of ravenous wolves...

These words introduced Deadlands to the world back in 1996, spawning decades of amazing tales and memorable monsters. Now the granddaddy of Horror Western games is back with a brand new edition.

It's now 1884 in the official timeline. The Civil War ended in 1871 at the Battle of Washington, an epic conflagration of steam and steel. The Great Rail Wars are over as well, finishing not with a whimper but the bang of  Dr. Darius Hellstromme's ghostfire bombs at the gates of Lost Angels.

Even the Servitors, the Reckoners' chosen champions on Earth, have been defeated—at least for a while. Reverend Grimme vanished in a massive flood that destroyed his city, Raven's Last Sons were defeated by the Great Summoning, Stone was foiled in the barren expanse of Death Valley, and Dr. Hellstromme's latest scheme to open the gates of Hell proved fruitless.

In response, the Reckoners have turned their blasphemous gaze back to the grassroots of evil. They've given life to dark desires and horrible abominations that live in the shadows of the isolated frontier, far away from the attention garnered by the overt plans of their Servitors.

The heroes of the Weird West join with the secretive Twilight Legion in the distant outposts, chaotic boomtowns, and lonely settlements of the West to fight evil and quell the fear that gives the Reckoners their power.

So gather your posse of heroes and hit the trail, from the frozen north to the arid deserts of the Southwest, from the industrial East to the fractured canyons of California's "Great Maze."

The Weird West awaits with adventure, mystery, and more monsters than you can shake a Peacemaker at.

Deadlands is the long-awaited return to Pinnacle's oldest and most popular setting. First published in 1996, the original "Deadlands Classic" system won countless awards and its bold, bright orange books are still a striking and valuable addition to gaming shelves the world over.

Deadlands has told some epic tales since it first burst onto the scene in 1996, but you don't need to be steeped in its storied past to join in the hootin' and hollerin'. If you're an old hand, we think you'll find it both familiar and refreshing.  If you're new to the world or setting, this is the perfect time to join the wagon train (and if you've lapsed, we forgive you for that, partner). We've recapped and summarized the monumental events of the last 24 years so you can catch up.

This new edition is the biggest revamp of the game's background and rules since the Reloaded edition from 2005. It's been revised, rewritten, and refocused by both Deadlands Line Editor Matthew Cutter and original creator Shane Hensley.

All the rules have been updated and adapted to the latest version of the Savage Worlds Adventure Edition. You'll need that book to play. You can add it to your pledge as an Add On if you don't already have it, or you can check out the PDF now.

Arcane Backgrounds are tightened up. Those nasty Harrowed had the same overhaul we gave them in Lost Colony (including letting the Devil out!). There are new and streamlined rules for dueling. And of course a passel of new Edges, gear, infernal devices, and powers to blast the tarnation out of the creepy crawlies coming to do your party in.

For you Marshals (that's what we call our Game Masters), there's a comprehensive overview of the Weird West after the events of the Servitor Plot Point Campaigns, including new plots, perils, and intrigue for cowtowns, boomtowns, and old favorites like Lost Angels, Tombstone, Deadwood, Dodge, the City o’ Gloom, and a few new locales we might surprise you with! And of course this handsome tome also includes enough rascals, varmints, and critters to keep a posse busy 'til doomsday.

Now that the tales of the Servitors have been told in their individual Plot Point Campaigns, Deadlands is returning to its roots with more local yarns of dread, terror, and violent action. The new edition and supplements to follow turn their baleful eyes from the world-shaking events of the Reckoning to isolated frontier towns or sinister machinations in the few larger settlements. The Twilight Legion must root out the evil that lurks in all-too-human souls, the lonesome hills nearby, or the dark woods at the edge of town.

To showcase the return to more personal tales of horror and adventure, we've created the Horror at Headstone Hill campaign set!

The campaign features a single county in Wyoming and the terrors that lurk in a booming mining town and environs. Your heroes roam about the map, interacting with the locals, solving mysteries, fighting abominations, and—with luck and a steady shootin' iron—eventually lower the "Fear Level." That's how you defeat the Reckoners' terrorforming, amigos, and Horror at Headstone Hill showcases it front and center.

The Deadlands: Horror at Headstone Hill Boxed Set contains an introductory booklet on the region for the players with notes from Tombstone Epitaph reporter Lacy O'Malley and the Twilight Legion, a Marshal's guide detailing all the locations on the map and a full sandbox-oriented Plot Point Campaign, a poster-sized map of the county, and a selection of player handouts to drive this incredible tale of six-guns and sorcery to its bloodstained conclusion!

Something happened at Devil's Tower recently. Something terrible. A being called the Cackler raised a powerful sorceress of legend, Morgan Le Fay, sending ripples through the many worlds of Deadlands. From the Dark Ages to the far future planet of Banshee in Lost Colony, the "Morgana Effect" has caused subtle changes from the world we knew before.

The Morgana Effect is a big story that ripples (quietly for now) through all the settings of Deadlands—including the upcoming Deadlands: Dark Ages, the Weird West, Noir, Hell on Earth, and already released Lost Colony. It's also a story-based reason to change the rules and some parts of the setting we've been hankerin' to adjust for a while. You can read more about the latter here, but we think even those of you who have been with us since '96 will welcome the changes once you take 'er for a test ride.

Over the years we've seen some amazing gaming setups, but collecting and painting a comprehensive collection of cowpokes and critters can be both time consuming and expensive. That's where the Deadlands Pawns come in.

We've created a selection of heroes, villains, and monsters in thick punchboard (the sturdy stuff board game tokens are made from) to represent some of the most common and iconic encounters in the Weird West. These figures are even die-cut to the contour of the character image to make each pose as dynamic and striking as possible.

The Deadlands Pawns Boxed Set contains 8 sheets of thick punchboard, containing over 100 pawns to bring the Weird West alive on your tabletop. If the set does well, we will expand the line to include additional Deadlands sets and pawn sets for our other lines.

The core book for Deadlands: The Weird West is a 192-page hardcover book, in our usual "graphic novel" size, and glorious, bloody, full-color throughout. That amazing cover is by Aaron Riley, a fan favorite of the entire Savage Worlds line!

The Deadlands the Weird West Core Boxed Set includes a copy of the hardcover rules as well as a brand new poster map of the Weird West by the phenomenal Cheyenne Wright, a set of 25 Bennies, a set of custom-colored dice and Wild Die, and a Game Master's screen and introductory adventure, Double Down at Sundown, by Rob Wieland!

Want to see the new screen? Here it is, partner! The tri-fold screen is our usual landscape format with gorgeous art on one side and all the charts and tables the Marshal needs on the other!

Want the Rippers Resurrected Expedition Amazon supplement or Deadlands: Lost Colony or Rifts® for Savage Worlds Boxed Set? These will all be available to ship with your order.

And if you want to budget, here are the prices. Thanks as always for your support of our little company!

Here's where you can find us on social media: 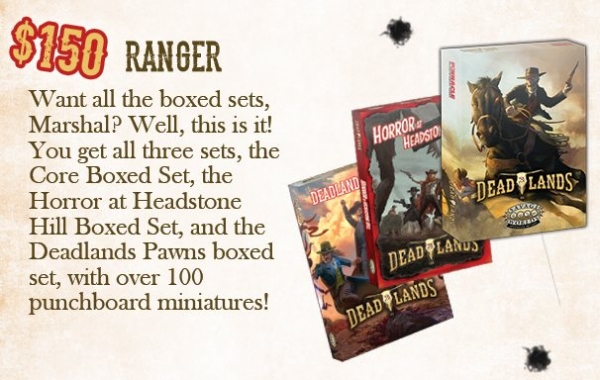 BRIDGE USER:
If you signed up in the period between the Kickstarter ending and before the PledgeManager portal went live, that's called a "bridge." Please note you will need to email us at site.admin@peginc.com to be upgraded to a higher reward level. View our Kickstarter page for the reward levels. As a final reminder, late backers may request complimentary PDFs of physical items after checkout, but are not eligible for the full digital rewards our Kickstarter backers received.

The Gunslinger reward level offers the Deadlands the Weird West Boxed Set: the core book in full color hardcover graphic novel format, a GM screen plus adventure, a set of 25 Bennies, set of seven dice, brand new poster map of the Weird West, and six Archetype Cards. Contents are housed in a sturdy box to make your shelf as purty as can be! 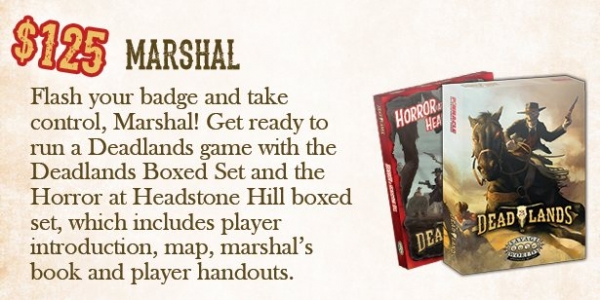 The Deadlands the Weird West: Horror at Headstone Hill boxed set contains the Marshal's Guide (a softcover, full color, 96 page book), an eight page Players' booklet, a map of Uinta County, Wyoming, and a special Wild die and a selection of player handouts. 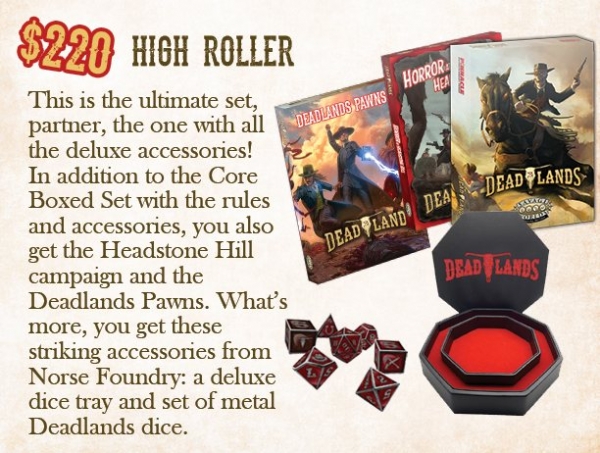 One last step to go!

Share your email, we will send you an invite!

If you're already have a PledgeManager account from another project, just sign in using the button below to join the project.

Complete your information below and we will send you an email to get started!