Go Directly To Rewards
Welcome to the PledgeManager for Rifts® for Savage Worlds: Atlantis Rising!
If you missed our campaign, don't dismay! Just choose an option below.

ATTENTION: this is a pre-order portal. Pre-orders are NOT eligible to receive any physical or digital Kickstarter-exclusive items.

Kickstarter backers should go HERE for more project info or to log into their order.

Shrouded by the Demon Seas, birthplace of a wondrous human civilization, and now host to a bizarre cosmic evil: Atlantis is a threat like no other. The massive isle is ruled by the Splugorth, and from it their tendrils of influence snake out across Rifts® Earth. Yet the Splugorth are not the only threat inhabiting the treacherous waters—the Horune Pirates, Naut'Yll invaders, and the Lord of the Deep also haunt the world's oceans. On their own, each of these menaces is a curse to humanity at sea and onshore. Together, they endanger intelligent life across the planet!

Resisting such malign force may seem impossible, but the Tomorrow Legion is gathering equally powerful allies to battle the oncoming storm. The True Atlanteans and their ancient cousins the Lemurians are eager to join the battle against their ancient enemies. The New Navy, a remnant of the naval might of the long-gone USA, is also ready to join the fight. Working together the forces of good can turn the dark tide, but it won't be easy.

To succeed, our heroes must harness the power of exotic new gear including the legendary rune weapons, discover the power of tattoo magic, unearth the might of Bio-Wizardry, and learn to control the enigmatic magic stone pyramids which first opened Earth to the Megaverse®.

Fight back against the chthonic horrors bent on terror and subjugation! Survive the wrath of monsters from the depths in new Savage Tales, and discover Atlantis in a heroic Plot Point Campaign fighting against the Minions of Splugorth.

Let's take a closer look at the wonders that await in Atlantis, and the other accessories on offer in this campaign.

This gorgeous, full-color graphic-novel size hardcover contains all you need to play as the unique heroes of Atlantis, Lemuria, the New Navy, and more. It also contains plenty of new equipment options including ocean-going weapons and vehicles, Bio-Wizardry items and symbiotes, legendary rune weapons, and magical tattoos! To top it all off, there are Savage Tales and an epic Plot Point Campaign of intrigue, adventure, and exploration for everyone to enjoy.

Bring your tabletop to life with our new Rifts® Pawns Boxed Set 1! Featuring more than 140 die-cut sturdy cardboard pawns, this set contains everything you need to get started in Rifts® Earth with dozens of creatures to throw at your hardy legionnaires. Card bases are included with the boxed set, or you can use plastic bases (available as an Add-On in this campaign).

Our Archetype Dossiers allow players to jump into any Savage Rifts® game quickly. We're printing our existing 12 archetypes from PDF Sets 1 and 2 in a new sturdy "dossier" portable card format, adding SIX more ready-to-play Atlantis-themed heroes to choose from, all in a sturdy and convenient storage box!

Map Pack 1: Ruined City features an apocalyptic urban area destroyed by the Great Cataclysm on one side, and a ramshackle settlement on the other—perfect for use in any region of Rifts® Earth.

Map Pack 2: Atlantis Pyramid features a magic stone pyramid and its outer courtyard on one side, with the pyramid's interior on the other side. We'll have detailed images for you soon!

Our Booster campaigns are smaller support projects for our existing lines. They come with Booster Rewards built-in rather than Stretch Goals. We're definitely going to print them on our own no matter what and want you to know that upfront, but are asking for your backing so we can order the right amount and most importantly, create the extras that add to the entire experience for all of us—like maps, pawns, and Archetype Dossiers. We play too, and we want all these goodies as much as we hope you do!

We plan to support Rifts® for Savage Worlds on platforms like FoundryVTT and Roll20 as our in-house VTT team can get to them, and Fantasy Grounds plans to release products for their system. DIY VTT assets are also in the works for release through our website. Modules tailored to specific VTT platforms with additional features, like automation, are sold separately on the PEGinc.com website or a platform's marketplace.

It's hard for a small company like ours to get the word out about our game and our worlds. If you care to help boost the signal, you can do so using the following channels. Thanks for the help, Legionnaire! 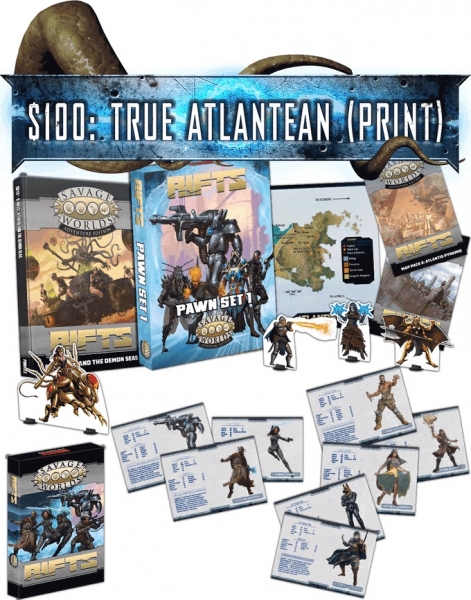 To make your Rifts® for Savage Worlds collection complete, this reward level gives you everything in PRINT + PDF from this Booster campaign! 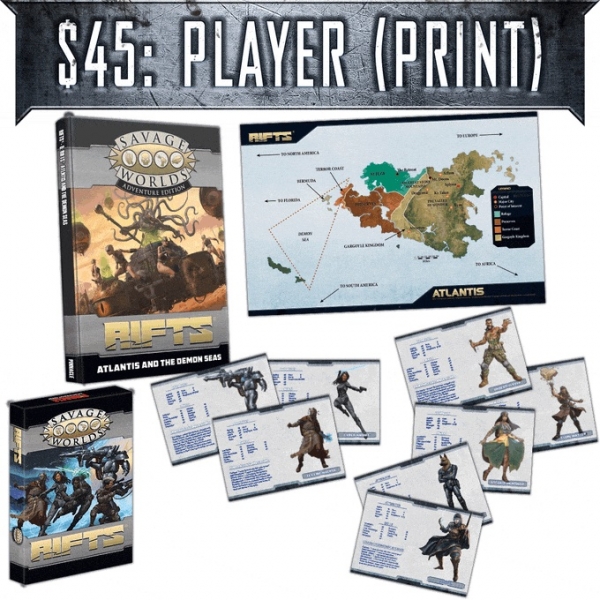 One copy of the hardcover, full color, 192 page book, Rifts®: Atlantis and the Demon Seas, a Poster map of Atlantis, and a set of Rifts® for Savage Worlds Archetype Dossiers (12 pre-generated characters from Archetype Sets 1 and 2, and adding SIX more from Atlantis, Lemuria, and surrounding areas)! Includes complimentary PDFs. 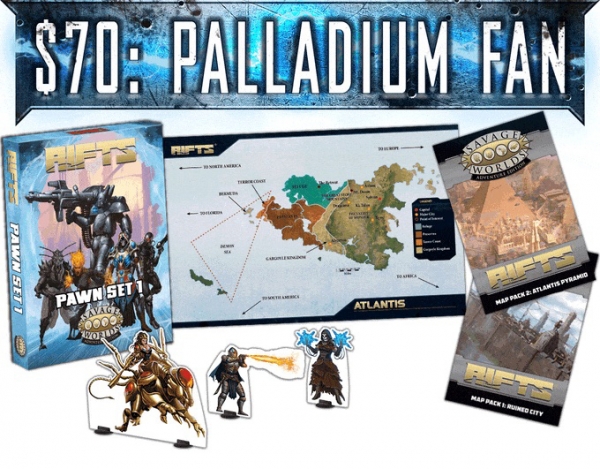 Welcome, Palladium Rifts® fans! We want you to play, too!

This reward level gives you the Pawns Boxed Set 1, Poster Map of Atlantis, Map Pack 1: Ruined City, Map Pack 2: Atlantis Pyramid, and complimentary PDFs for print-and-play. Pawns are printed on die-cut sturdy cardboard and packaged with cardboard bases. Map Packs 1 and 2 are each 24"x30", double-sided with a light one inch grid, printed on heavy cardstock, and laminated for use with wet- and dry-erase markers.

One last step to go!

Share your email, we will send you an invite!

If you're already have a PledgeManager account from another project, just sign in using the button below to join the project.

Complete your information below and we will send you an email to get started!